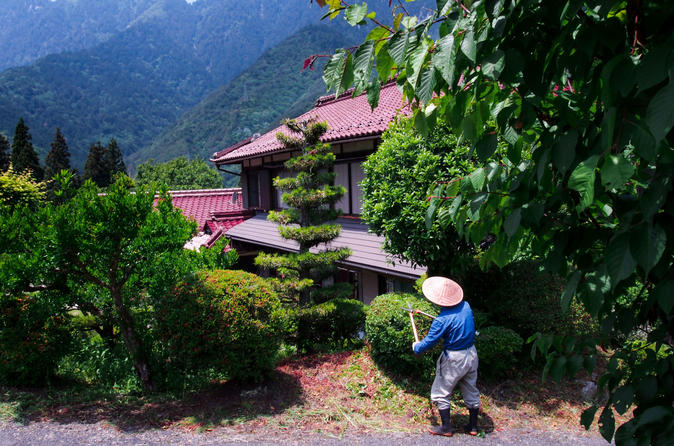 1 night at a traditional Japanese lodging and 2 days casual walking self-guided tour along the Nakasendo trail between Nakatsugawa and Tsumago.

Over the course of two days of easygoing walking and one night spent at a local inhabitant's house, immerse yourself in the folkloric landscapes of the Japanese landscape along the Nakasendo road, nestled between the villages of Nakatsugawa and Tsumago. During Japan's feudal period (1603-1868), the Nakasendo was one of five routes that linked the economic capital, Tokyo, with the imperial capital, Kyoto. Unlike the Tokaido, which was replaced by today's Shinkansen train, the Nakasendo was saved from rampant modernisation and still upholds an old-fashioned charm. Created by general Tokugawa in order to assert his political domination, the route spans a distance of 534 kilometres and includes 69 rest stops. Its name literally means ""mountain road"" and is a means of communication in case of a large flood on the Tokaido: the coastal road.


In the morning, grab your provided ticket and take the train from Nagoya to Nakatsugawa to get started on the trail. After breakfast, you'll head out on your journey and, all the while passing residential areas, leave the city behind. A perfect walk for familiarising yourself with the daily life of the Japanese countryside. On the outskirts of a bamboo forest, you will come across the original part of the Nakasendo, which, like Roman roads, is cobblestoned. It is in these rural surroundings that you'll find the inn where your hosts will welcome you with a restful meal. Once you've had your fill, relax in a hot bath before a Japanese-style sleep: futon and tatami.

DAY 2 : walk on the Nakasendo
Once out of bed, a Japanese breakfast awaits you: miso soup and fragrant rice. Get ready for your second day of adventures! By following the path of the samurai, you'll pass the picturesque village of Magome. Well-preserved wooden houses that line the main street give you the feeling of having travelled back in time. You'll make a stop at a deli to purchase an afternoon picnic, which you'll eat en route, in one of the tea-houses that dot the road. Afterwards, a pleasant walk interspersed with photo stops right up to the last village: Tsumago. Here, you'll visit an original inn: Wakihonjin, built in the late 19th century and host to the Meiji Emperor himself. Lastly, you'll take the bus towards Nagiso station, where you'll take the train to either Matsumoto or Nagoya and continue with the rest of your stay. "

1 night at a traditional Japanese lodging and 2 days casual walking self-guided tour along the Nakasendo trail between Nakatsugawa and Tsumago.